Notice: Undefined index: expires_in in /home/forge/moneycube.ie/wp-content/plugins/convertpro-addon/addons/analytics/classes/class-cp-v2-ga.php on line 288
 Auto-enrolment in Ireland: how will it affect you? – Moneycube

Auto-enrolment in Ireland: if you’re serious about your pension, Ireland’s auto-enrolment solution won’t get you there

Moneycube’s calculations indicate a regular person can hope for a retirement income of just under €12,000 per year using Ireland’s promised auto-enrolment programme.

On 29 March the government announced auto-enrolment really is coming to Ireland – in 2024. So how will auto-enrolment affect you as a member of the workforce, or as an employer?

As this has been on the cards for a quarter of a century, even the government had to admit that it has been “a long time coming”.

The government seems confident it will be operational by January 2024. It admits this timetable is “ambitious”, requiring as it does new laws, another pensions authority called a “Central Processing Authority”, not to mention fund providers and employers ready to run it all.

Auto-enrolment is the practice of automatically signing up workers to pay into a pension. The idea is that by making opting out of a pension the default choice, rather than opting in, people will “do the right thing” and pay into pensions. At the same time employers will be required to contribute an element of salary, and the government offering tax relief.

There’s no doubt that auto-enrolment is a positive development for the people of Ireland, and a much-needed route to making many people’s financial futures better.

And while it might not be perfect, making a start on building pension wealth is always better than doing nothing at all.

How will auto-enrolment in Ireland work?

Firstly, it will be phased in over a decade. In the early years, employers and employees will each be required to contribute 1.5% of salary, rising to 6% by 2034. This approach is designed to ease the financial impact of the changes, but is nevertheless a significant new cost to many employers, who are already facing an inflationary environment.

Secondly, the State will offer a top-up of €1 for every €3 paid into the pension by the employee. This is equivalent to tax relief at 25%, which is significantly worse than the 40% relief any top-rate taxpayer currently receives.

Here’s an analysis of how employee contributions are topped up. You can see the auto-enrolment pension holder is €34 worse off than the company pension holder for every €100 they put in.

Thirdly, the investment choice will be kept very simple, with a choice of four investment funds of differing risk-reward profiles, including a default “life-cycle” fund which will dial down risk-reward as you approach retirement. The providers of these funds are unidentified, but apparently total costs will be capped at 0.5% of the value of each pension.

Auto-enrolment will apply to those earning €20,000 or more, and between the ages of 23 and 60 only. We estimate this will still leave over 250,000 Irish workers out of the pension system – not counting those who are eligible but opt out.

What does this mean for my pension?

We’ve run the numbers, and, particularly in the early years, auto-enrolment is unlikely to be attractive for many employees compared to a company pension. (You’ll find our main assumptions for the calculations in this section at the end of this article).

If we assume a safe drawdown rate of 4% of the pension pot each year after charges (ie not so high that you run out of money), this suggests annual income of €11,910.

The picture is substantially worse if you are later in your career: a 48-year-old relying on auto-enrolment to fund their pension, and earning the same €42,749 salary, could expect a pension pot at retirement at age 68 of €132,011.

Using the same drawdown rate, this suggests annual income of €5,280.

If the State pension – currently €13,172 – still exists in its current form in 2040 and beyond, it clearly that makes a big difference to these scenarios. But there’s no guarantee of that – in fact one aspect of auto-enrolment is to give the government an “off-ramp” for the State pension.

So what should employees do?

What this means is that most workers would be unwise to rely on auto-enrolment to sort their income in retirement.

What can you do today? In particular, it’s worth looking at contributing to a pension out of income for the years until auto-enrolment starts. You can still start a pension and claim relief on tax paid in 2021, not to mention 2022 and 2023.

Assuming auto-enrolment does begin in 2024, there may be other ways to enhance your pension contribution above the 1.5% of salary, for example, in a separate additional voluntary contribution (AVC) account.

So is an auto-enrolment pension the best option from 2024?

Auto-enrolment is a lot better than no pension at all. We certainly wouldn’t recommend opting out altogether. But for those who have the option, a company pension is almost certainly a better alternative.

Firstly, the tax relief (effectively 25%) is worse for anyone paying top-rate tax at 40%. For a top-rate taxpayer, that means that a net contribution of €100 is worth €167 in an occupational pension, but only €133 in an auto-enrolment pension. 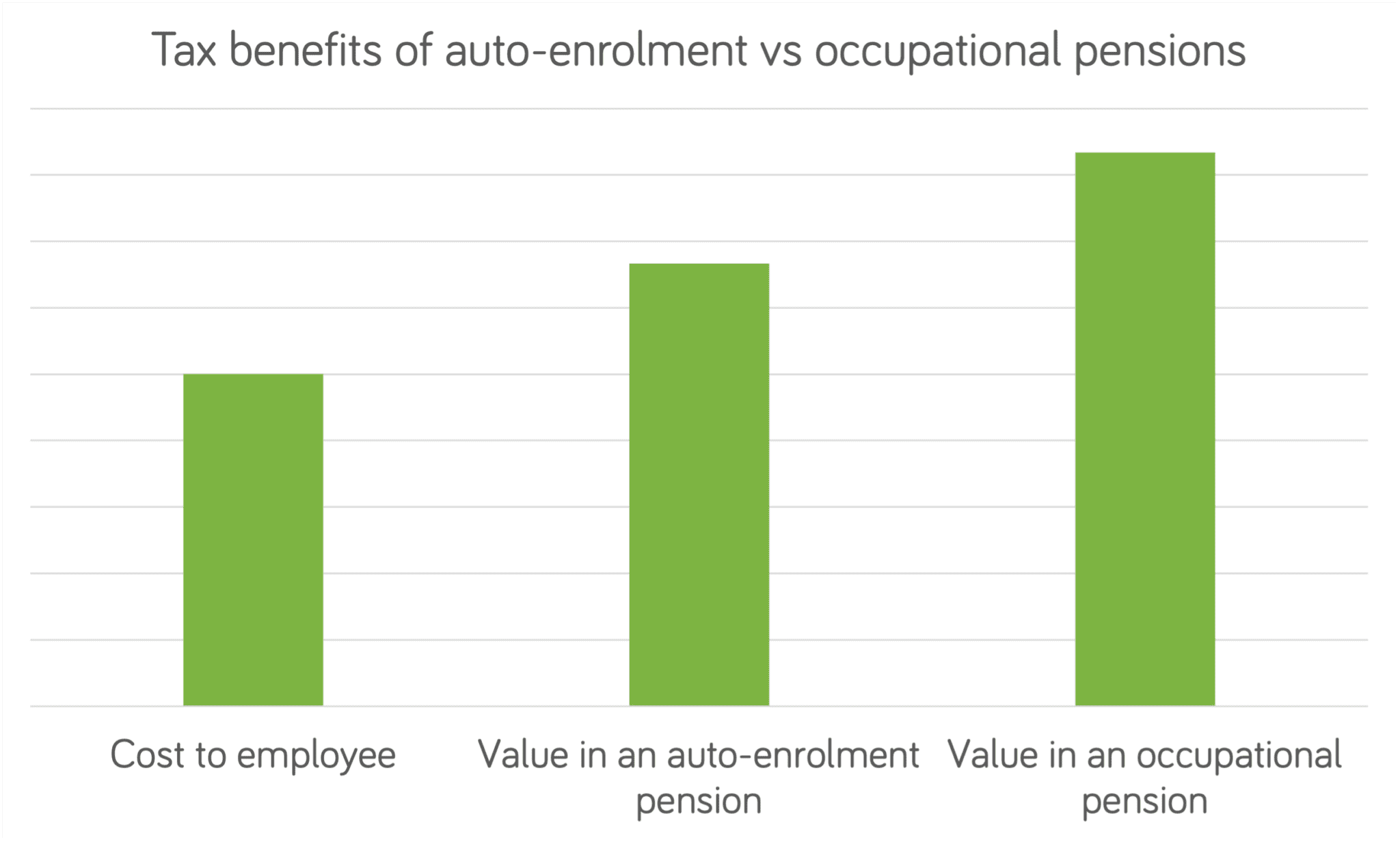 Secondly, it’s unclear how workers can boost their pension. If 1.5% per year is not enough – and it isn’t for most people – how can they increase their contribution, and will the State continue to top it up?

The government documents state that

initially, it won’t be possible for members to pay additional voluntary contributions (AVCs) into their AE pots, but this is something the CPA may consider at a later phase.

Worse still, it seems there is no way for employers to make one-off lump sum payments into auto-enrolment pensions in Ireland – for example in a year of exceptional trading, or as a way to invest a bonus.

Thirdly, the fund choice is more limited than any pension available in Ireland. That might make the administrator’s job simpler, but it’s not obvious that it benefits the end-user. There is no mention, for example, of the availability of ethical funds, for example. If the fund manager of the four funds performs poorly, what is the pension holder to do?

Fourthly, accessing an auto-enrolment pension will be significantly less flexible. It appears these pensions will only be accessible before State pension age (ie age 68 for most joiners), will be serious ill health:

The only circumstances that are being considered in terms of early access to pension savings is in relation to enforced workplace retirement due to ill health.

Contrast that with existing company pensions, where you can access a pension from age 50, or even PRSAs, the benefits of which can be drawn down from age 60.

Fifthly, the drawdown options look less attractive than under a company pension. For example, many employees that auto-enrolment is aimed at will have modest funds and long service in employment. Presently, people in this position can often draw down all or most of their pension pot as a lump sum, free of tax. Under an auto-enrolment pension, it seems likely that only 25% of the pension will be available as a lump sum, with the rest being drawn down gradually and taxed over many years.

Lastly, the implementation of auto-enrolment in Ireland appears optimistic. Consider this statement from the government’s announcement:

Services will be provided and supported through an easy-to-use online channel where participants will see their savings pots grow quickly and substantively.

The government might do well to remind itself that investments can go down as well as up!

More seriously, considering the average value of each account is likely to be in the low thousands of Euro, it is difficult to believe that an entire government agency, custodianship, fund management, account management, banking, onboarding and ongoing customer service and communications can be delivered for the intended maximum cost of 0.5% of fund value. If it cannot, then exactly who will foot the bill?

If those who join have an average salary of €42,749, that suggests all of this work can be done at a year-1 cost of €16.03 per member. Yes, there will be scale advantages, but it is hard to believe that 750,000 people can be enrolled in pensions for the price of three pints.

In the UK and elsewhere by contrast, fixed monthly account fees for auto-enrolment are the norm.

Where does auto-enrolment leave employers?

What is clear is that the government expects employers to do the heavy lifting when it comes to auto-enrolment in Ireland. Employers will contribute at a rate three times that of the State.

Although the phasing in of contribution levels from 1.5% to 6% over a decade will soften the blow, auto-enrolment represents a significant extra cost to business, at a time when there is already significant wage pressure and a high overall tax burden.

What’s more, it applies to employers of all shapes and sizes.

When auto-enrolment was introduced in the UK in 2012, only companies with 250 or more staff were required to operate it. Small businesses were not brought into the fold until five years later.

No such approach is being considered in Ireland. Aside from the costs, this has the potential to make January 2024 a very busy time as 750,000 people join a pension scheme for the first time!

Savvy employers do have alternatives however. As we’ve discussed, an occupational/ company pension has some major advantages over an auto-enrolment pension, including better tax relief.

Financially, an employee is better off from an employer contributing 4.5% to a company pension than 6% to an auto-enrolment pension, due to tax relief at 40% rather than at an effective 25%. Engaging with staff on how to get the most out of their pension is the key to savings for both business and pension savers.

Interested to know more about how auto-enrolment affects you as an employer? You can contact us to discuss your options.  You can also watch this video with Ian Slattery, president of the Irish Institute of Pensions Management, Neil McDonnell, chief executive of ISME, and Dean McClelland, founder and chief executive of Tontine Trust, as part of Pensions Awareness Week 2021.

Ultimately, it’s great the government has finally fired the starting gun on auto-enrolment in Ireland. Many people stand to benefit.

But the countdown to January 2024 is on, and there is a lot of work in terms of fleshing it out, engaging workers, and building infrastructure to make it happen.

In the meantime, there are better alternatives for employees and business owners to secure their financial future and save tax via company pensions.

Key assumptions for “What does this mean for my pension?” section