If you’ve picked up the business news this week you’ll likely have heard about Reddit users taking on hedge funds through the group Wallstreetbets.

So what’s going on, where will it lead, and what does it mean for investors based in Ireland?

GameStop is a US-based seller of video games (they have about 30 shops around Ireland).  Its shares have been hit by a frenzy of interest from private investors, mainly in the US, freshly armed with stimulus cheques and access to cheap online trading platforms.

Why GameStop?  Well, as a business, it has been struggling, and its shares were the subject of short trades by several hedge funds who placed bets which would pay out in the event the share price fell further.

As private investors have driven the share price up (by over 1500% this month, and 400% this week), some hedge funds have been forced to conclude those bets, incurring massive financial losses.

Many Reddit users see this as a victory in the battle between Wall Street and Main Street.

What will happen next?

This story has some way to go, so there will likely be some more twists and turns.  But three things seem clear.

1. Interest is spreading to other companies and countries.

This isn’t purely about GameStop – and it’s not just about retail trade money either.  Plenty of other hedge funds are looking hard for ways to exploit the volatility, so this trend might be with us for a while – although regulators are paying close attention.

2. Someone will be left holding the baby.

A glance at the chart below is enough to know that the share price bears no relation the underlying value of GameStop.  There’s no doubt that some participants are going to be left with massive financial exposures here as they are buying in at very high prices. 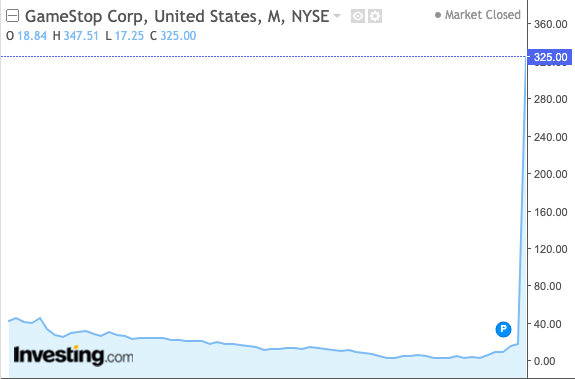 For example, Apple, which posted slightly better than expected results this week, saw its share price fall by around 7%.

It seems at least part of this was down to investors selling their liquid assets to meet obligations on short trades.

So what does it mean for your pension or investment?

Ultimately this is speculation, not investment.

Nothing wrong with that perhaps, but there will be winners and losers when it all plays out.  It is a world away from buy-and-hold investing.

It may create some short-term ups and downs in the wider market.

But if you are putting your money into an investment or a pension in a steady way into professionally managed funds, with the aim of growing your money over time, the GameStop show should not cause major concern.