Vanguard’s LifeStrategy funds have in fact been available in Ireland for some years… but only in sterling funds, with high minimum investments, and considerable hassle.

Now it’s become possible to get this exposure in Euro terms, from €10,000 upwards, via a new fund range from Standard Life.

LifeStrategy is a range of five funds, each with a different mix of equity and bonds. The funds offer increasing levels of equity, from 20% up to 100%.

As Vanguard explains, “Shares typically give you a higher return over the long run, but are riskier. Whereas bonds are more stable but offer lower potential returns. Having a mix of both helps balance risk and reward.”

Vanguard itself is a force to be reckoned with.  The inventor of the index fund back in the 1970s, Vanguard is now the world’s second-largest fund manager.  It has over $7 trillion of assets under management.

And more than $1 trillion of that is now invested in multi-asset funds such as LifeStrategy.

So what’s so good about these funds? There are three main reasons to consider these funds for (some or all of) your investment or pension.

Although there is a lot going on under the bonnet, the LifeStrategy idea is simple: create a portfolio weighted according to market capitalisation of each company you hold.

So if Apple represents, say, 4% of the value of all listed companies in the world, then Apple will be around 4% of your equity investment.

And by carefully rebalancing the fund to keep it at – say – 60% equity and 40% bonds, your investment strategy stays on track without you having to do much work.

On top of that, Vanguard offers massive diversification by putting together these funds using its wider range of funds as building blocks. Each fund holds north of 6,000 shares and bonds from around the world, offering huge diversification in a single fund.

Any fund will have its ups and downs, but Vanguard present strong evidence that they consistently perform towards the top of their peers.

Here’s a chart from Vanguard, based on Morningstar data for the five years to 30 June 21. 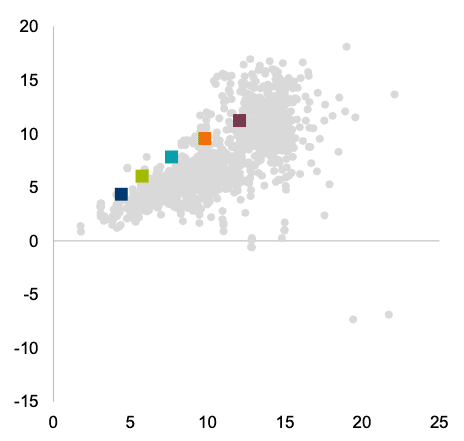 Vanguard’s long been a price leader in the investment world. Depending on the size and shape of your investment or pension, we can offer these funds a cost of 1% annually, including the cost of our advice, Vanguard’s fund management, online account access and deduction at source of all taxes.

So how do you invest in these funds in Ireland?

The easiest way to access these funds is via what Standard Life have called their Global Index Fund range. There are five of them, ranging from a 20% equity/ 80% bonds fund, to a 100% equity fund.

Sound familiar?  Yes, these are basically the same set of funds, tailored by Vanguard and Standard Life to the requirements of Euro-based Irish investors.

They come with a slightly different name, but the asset management is done by the same global team from Vanguard, with the same approach of keeping a constant percentage split between equities and bonds.

These funds are available to invest in on a regular or lump-sum basis, or as part of a pension fund, offering that combination of simplicity, performance and cost to many savers in Ireland.

Interested to know more about Vanguard funds?  Read on