It sometimes seems like its advertisements are on the side of every bus.  And AIB, Permanent TSB and Ulster Bank also promote it heavily.

So is it right for you, and is there a better alternative?

What is Irish Life MAPS anyway?

MAPS is a set of five multi-asset funds.  Each of the funds is designed to provide a different level of risk and reward, and you can generally move your money between the funds to dial your risk level up or down.

The funds were created in 2013, and at the end of September 2020, had more than €9 billion of funds under management.

The vast majority (nearly 80%) of investors’ money can be found in just two of the five funds.  MAPS 3 contains around €2.6 billion of investors’ assets, and MAPS 4 around €3.1 billion.

So here we’ve focused on those funds.

MAPS 3 is the lower-volatility fund.  41% of the fund was invested in company shares in September 2020, a figure little changed from our first review of MAPS two years ago.  (The rest was in bonds, alternative assets, property and cash).

61% of MAPS 4 was invested in company shares.  The holdings include some of the world’s most successful companies in technology, consumer goods and industry. 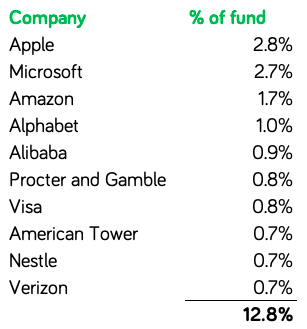 It’s a pretty uncontroversial selection of some of the biggest companies in the world.

In fact, if you simply bought a developed markets index fund, the top 4 in the list (8.2% of the value of MAPS 4) would be exactly the same, and most of the others would also appear somewhere near the top.

How has MAPS performed under pressure?

The true test of a multi-asset fund is how it weathers a major market downturn.

To judge by the first three quarters of 2020, results are decidedly mixed.

Here’s the chart for MAPS 4. 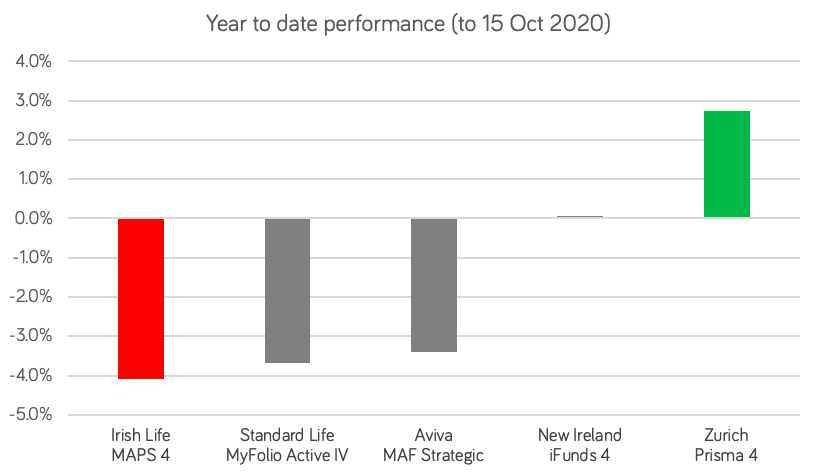 We’ve compared it with similar funds from to other four life assurance companies in Ireland: Aviva, Friends First, Standard Life and Zurich.

The Irish Life, Standard Life, and Aviva funds have all lost more than 3.4% this year. New Ireland’s fund is just about even for the first nine months.

You can see that Zurich Life’s fund leads the field with growth of 2.8% so far this year.

The long game has disappointed too

It’s unfair to judge any fund over a 9-month period alone.  Investing is a long game – and by some measures, MAPS has performed well.

Here’s a chart (from Longboat Analytics via the Irish Times) looking at the last 3 years:

Again Zurich’s fund tops the table at 19.1% total growth over 3 years, while Irish Life is bottom of the pack at 3.8%.

And here’s the 5-year view:

Over 5 years, MAPS is a little more impressive, coming in third out of five.  But the Zurich fund is clearly ahead.

In promoting MAPS, Irish Life has made much of its ‘Dynamic Share to Cash’ strategy.  Essentially, this approach aims to read the tea leaves in the stock markets.  When the indications are negative, it tries to decrease the portion of the funds in shares, and increase the portion in cash.

In reality, all multi-asset fund managers attempt this, whether or not they give it a fancy name.

To be fair, MAPS did prove less volatile in the market madness of March 2020.  Here’s a comparison of its performance vs the Zurich fund.  As you can see, the Zurich fund fell further.

But we think a lot of investors would be prepared to tolerate that.  The Zurich fund did no more than give back the gains it had achieved in the preceding three months – and as the arrow shows, it quickly pulled ahead again.

(If you’re really interested in the details on volatility and drawdown, it’s also worth pointing out that Zurich’s fund has yet to return to its former ESMA rolling 5-year volatility rating of 4.  But that seems likely to change in the coming months, and in fact Prisma 4 holds a smaller percentage of its assets in equities than MAPS 4).

Trouble is, these performance charts come with a lot of small print.  In particular, the figures we’ve called out are before charges.  And if you’re invested in Irish Life MAPS, the charges can be heavy.

Firstly, there’s the annual management charge, paid to Irish Life for running the fund.  This can vary but Irish Life themselves indicate that the charge is 1.65% per year (see page 21 of this document, ‘Clear Invest’).

This is certainly at the expensive end; here at Moneycube we offer access to comparable multi-asset funds for 1.25%.

Then there are early exit charges.  If you choose to take your money back from Irish Life in the first three years, you’re likely to be hit with an early exit penalty of 5% of your cash.  (And you’ll be charged 3% if you sell in year 4, and 1% in year 5).

At Moneycube, by contrast, there are no exit fees.

Lastly, there’s the 1% government levy.  Normally, this is an immediate 1% charge taken from your savings when you invest with a life assurance company.

However, at Moneycube we’ve negotiated terms with our fund suppliers to compensate you for this cost.  (This is done via what’s known as an increased “allocation rate”).

The MAPS funds are also less flexible than other options.  Irish Life requires a €10,000 minimum investment, with top-ups of €1,000 or more.

We’ve set out a comparison in the table below. It suggests that you’d make around 11% more profit by using Moneycube instead of Irish Life.  That’s the difference from fees alone – even before the benefit of any superior fund performance. 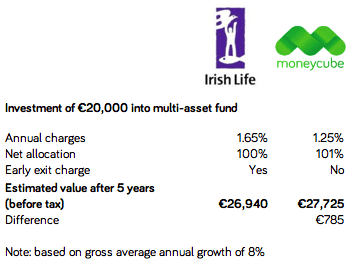 As Irish Life MAPS edges towards €10 billion of assets, we think it’s time for Irish investors to consider the alternatives.  Yes, there’s a reasonable track record of growth, and some solid underlying investments and risk management.

But the heavy charges and lack of flexibility to exit early without penalty, or invest smaller amounts, might mean there are better options out there for you.

Talk to Moneycube today if you’d like to find out more.